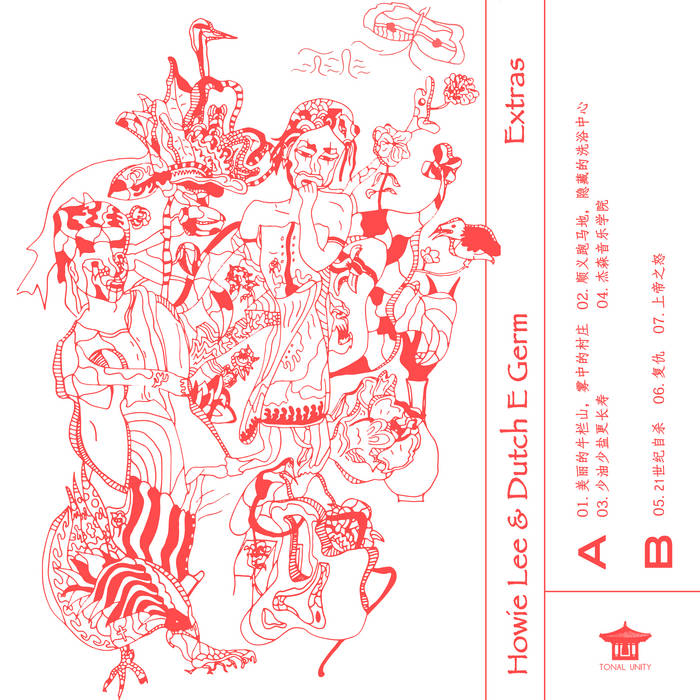 For our first release of the new decade, we are joyful in welcoming Howie Lee to the Tonal Unity family. A visionary artist combining a thirst for roots and culture with a prescient view of futuristic aesthetics, Howie is forging a singular path in China and abroad with mind-bending live shows, releases, and music videos. Co-founder of the Do Hits label in Beijing, Howie has been on a mission to explore Eastern sounds in bold new formations. On “Extras”, he presents us with a cassette-only release of 2 collaborative sessions with the enigmatic NYC artist Dutch E Germ.

A quietly influential figure in multiple musical zeitgeists, Dutch E Germ aka Tim DeWit was a founding member and producer of Gang Gang Dance. He went on to become a resident at Venus X’s GHE20 G0TH1K parties in NYC, and has scored runway shows for Hood By Air. He was sampled on Kanye’s hit ‘New Slaves’, and has remixed Eric Copeland of Black Dice, Fatima Al Qadiri, and Ben Frost.

The A-side of this cassette is taken from a cosmic session featuring fellow Do Hits label collaborator Jason Hou, alongside renowned beatsmith Kai Luen aka Soulspeak. The B-side is taken from a second session which sees Howie & Dutch exploring emotional depths and wide-open soundscapes. ‘Extras’ clocks in at around 50 minutes of in-between tracks and outernational goodness, exploring Eastern aesthetics within a fractal of sound.

Organic Sounds from Asia and Beyond

Bandcamp Daily  your guide to the world of Bandcamp